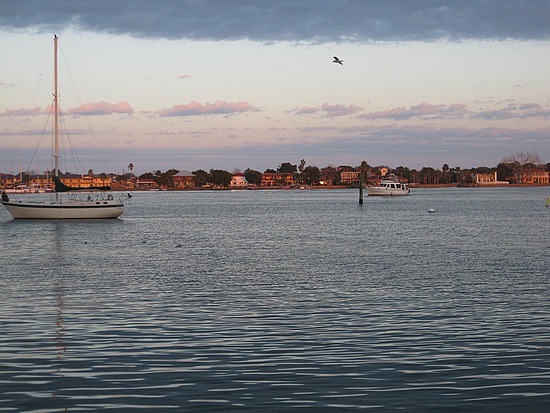 After a great night’s sleep, we enjoy a yummy ham and cheese omelet served by the friendly staff at the Bayfront Westcott House. With no time to waste, we head out in the direction of the St. Augustine Historical Society  to learn some information about the area, including the contributions of many black soldiers who helped protect the city during its many battles. From there, we went over to Fort Mose, an area constructed in 1738 by runaway slaves from North and South Carolina who found refuge in Spanish Florida. The 100 Africans integrated within the Spanish society and established a free black town called Gracia Real de Santa Teresa de Mose, making it the first free African settlement to legally exist in the United States. Ft. Mose later gained prominence by its successful battle to protect St. Augustine against the British in 1740.

And then, on to the Fountain of Youth, which depicts how Native Americans and Spaniards lived and worked together in St. Augustine during its early years. The grounds are an amazing display of birds and plant life, encampments depicting early life in St. Augustine, and sprawling landscape illustrating the area’s vast natural resources. It’s amazing to watch the peacocks prance freely around the grounds and to explore the various living history displays showing the life of the area’s settlers. If you visit, be sure to have a taste of the mineral-rich waters at the Fountain of Youth. Spanish explorers were convinced that these waters held the secret of a long and healthy life. Despite the sulfur smell, Michael and I sip the water. No comment yet on the effects of the water, but time will tell. With one more night at the Westcott Inn, the Globetrotters want to experience a different room, so the staff graciously move our luggage to the Alexandra room for our final night. What a pleasant surprise! The room is located in the inn’s newest building and is just as elegantly appointed at the Ponce room. Quaint, quiet and cozy.