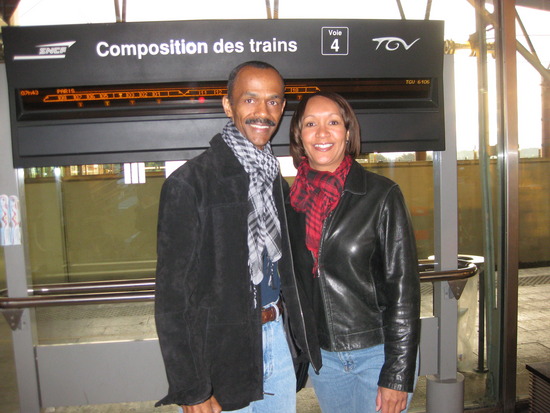 Why did Michael wake up at 3:15 a.m.? I think he was a bit paranoid about missing our train to Paris. We were both excited to take the TGV train up north from Marseilles. As difficult as it was to leave the Gignouxs—our hosts for the week—we had to move on to the next stop on our trip. So, after a long and sad farewell to Dominique, Jean drove Michael and me to the train station in Aix. Once inside, we double checked the departure time and gate, then in practically no time, the speeding train arrived and we were off to Paris. The TGV is a very modern, clean, comfortable rail line that originates in London (under a different name), and goes all the way up to Paris and beyond. It was amazing to breeze past the beautiful countryside, small villages and acres of flower fields, vineyards, and farmland. The homes in the country ranged from small village-style cottages to immense castle-like manors set atop hillsides. All of them looked old, not in a run-down kind of way, but in a way that lets you know they’ve withstood the test of time. Michael and I both managed to take a cat nap before arriving in Paris’ Gare de Lyon train station. That place was like a scene in a movie—people and luggage everywhere, dogs and children trailing behind adults, French language signage all around, trains coming and going, announcements blaring, people speaking in unrecognizable languages.  It was exciting and incredible! What a great welcome to Paris. I must admit that we had no idea in what direction to go once off the train, but we managed to find our way to the ticket station and a very helpful agent who instructed us. Then we found the currency exchange window, where we met a few other Americans from New York who were visiting Paris for the weekend. They had just arrived from Geneva, Switzerland. One of them remarked how insulated Americans are from the rest of the world and how we, as Americans, really must travel abroad more. Of course, we agreed. After a stroll around the station (inside and out) just to get a feel for the place, we eventually found the area where our train was to depart for Montparnasse, where Le Meridien Hotel is located. Just as we walked onto the platform, the train arrived. I quickly dragged my suitcase and rushed through the doors, with Michael trailing behind me. But then, the unthinkable happened—he got caught as the doors closed.

With half his body inside the train and the other half outside, along with one of our bags, he quickly slipped his body from between the doors back onto the platform and shrugged as the train departed. The look on his face read “Sorry.” I gasped when I realized he wasn’t on the train. The feeling of shock obviously translated onto my face because the other passengers in the cramped car glanced at me in sympathy. There I was alone in Paris for the first time, on the train with my luggage, but without my sweetheart. That wouldn’t have been so bad, except that the bag Michael had included my passport and cash. Yikes!

Globetrotter Rule #4: Do not panic! Think with a clear head.

First thought: Get off at the very next stop and wait for Michael. (Hopefully, he’ll exit and find me there.) Second thought: If he doesn’t arrive within the next 20 minutes, continue on to the hotel and meet him in the lobby. (Hopefully, he will do the same.) There were a lot things that could go horribly wrong with either scenario. But I wouldn’t allow myself to think of those things. Stay focused.

After what seemed like thirty minutes—but was actually only about three—the next train arrived. I desperately searched for a familiar brown face among the crowded train cars. Is that him? No. Is that him? Uggghhh! I purposely stood away from the other train hoppers on the platform so he could see me, and know to get off. How can I make myself look bigger?

Finally, the doors opened and a rush of humans exited. On tiptoes, with my neck outstretched and chin uplifted, I spotted a familiar cranium. It was Michael! Oh, thank God!

I waved frantically. He rushed over to me, dragging that darn suitcase, and we embraced. Our momentary panic melted away through laughter and hugs. Talk about LMBO! We actually laughed so hard I almost cried.

Have you ever been separated from your travel buddy? How did it happen, and how did it end? Comment below.